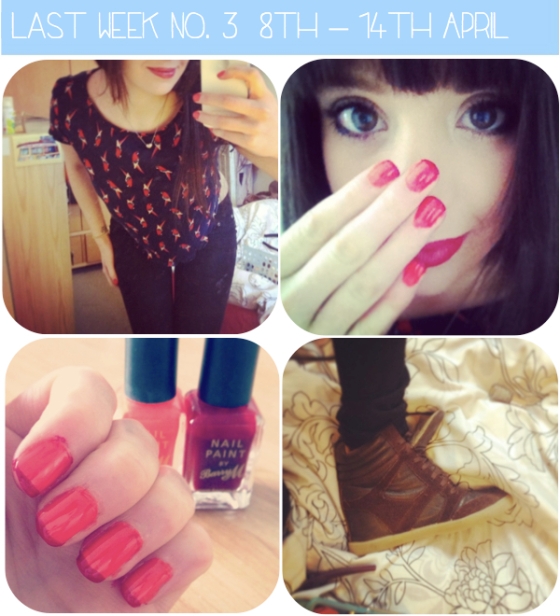 Sorry that this post is late! Bloody useless haha. But without further ado here is my latest ramblings and happenings complete with Instagram best snaps of the week.

Outfits & Nails: So I’ll work backwards and start with the weekend : ) I went for a couple of drinks with John’s housemates & friends on Friday night to New Cross. I wore a cropped tee shirt that I’ve had for ages. It’s navy blue with little bright parrots on, subtle but with a small pop of summer colour. It also has lovely scallop edges including the sleeves which makes it a bit more interesting for a casual evening outfit. I wore this with my super skinny jeans (the type you have to wiggle in to – but luckily they have an elastic waist instead of a button!) and brown, heeled trainers from River Island. I wore red lips and painted my nails a deep coral with dark red tips (both Barry M).

Work: The week itself was uneventful, I did some reception work in Farringdon Monday and Tuesday, John made a really nice Lasagne which was a surprise on Monday so that was dinner for 2 days >.<

Samples: Collecting dust amongst my beauty products are numerous samples and freebies, those you tend to accumulate every time you get a nice shop assistant or in a beauty bag free when you spend a certain amount on a brand. These little mini versions are often overlooked, I tend to already have something else on the go so put them aside. But I dug them out the other day and I thought why not!? I’ve been using them all everyday for the last week so for their miniscule size they pack in quite a bit of product. I’ll get a full review up soon, but here’s what I’m trying out: No.7 Protect and Perfect Beauty Serum, Estee Lauder Idealist Skin Care Illuminator, Dior Capture Totale eye serum and eye cream.

Sunday: On Sunday we walked in to Greenwich because the SUN was out, yep that long-lost friend of ours that’s been hibernating for, oh, only about 8 months!! It was a really nice day, had McDonalds, walked to the top of the hill which has a pretty good view over London and sat and drank some cider. The Market in Greenwich was pretty nice for a wander around, there were lots of unique patterned tops and crafty necklaces I’d have probably treated myself to if I’d had money!

Sometimes I can’t believe how fast a week flies by! I’m starting a new temping job role next with as a Communication assistant for a Hotel brand. Wish me luck! It’s scheduled to last a few weeks but we’ll see! What have you been up to now the sun has surfaced?!

Well Game of Thrones season 3 is here!! There was a huge buzz about its return and I think the first episode didn’t disappoint! I’ve only recently become addicted to this series but as you can probably tell I can’t stop raving about it. Definitely one of the best television shows out there at the moment and I do stand by my belief that atypically for its genre it appeals to a wide audience so if you don’t think this will be your cup of tea you may be surprised. Me and John become so engrossed each episode that we are often literally shouting at the screen and you feel such a huge rush of pride when one of the ‘goodies’ triumphs! (Although the line between the ‘goodies’ and the ‘badies’ is always thin in GOT.) Things I cant wait to find out in the upcoming series, When will Daenerys (who I did love but seems to be quite a brat recently) make it to Westeros and will she have any allies? Will Jon Snow become a traitor or will there be a allying of the Wildlings and The Wall as they fight the white walkers? P.S best quote from him in S3E1: “I want to fight for the side that fights for the living.” Also how is Arya going to get on and Bran (they’re two of my favourite characters)?! I’m thinking I have to start reading the books, they seem right up my street plus I just want to know more about the world and the characters. The only downside to the return of the show on TV means I can’t watch them back-to-back anymore, a week is so loong (yes I’m impatient).

Other things I’ve been watching this week are the latest Dr Who episodes. I quite like Clara as a side kick. She seems brave, curious and kind-hearted  (and I’ve got a bit of a girl crush >.<). Plus I’m very interested to find out about her parallel versions. I also caught up on New Girl. I kinda get why they are dragging out the Jess/Nick romance, (its hard to imagine where they are going to go with it’), but I think it opens up a lot of avenues and am rooting… so just happen all ready! Schmidt still continues to deliver epic quote after quote: (to Nick) “Here are some things you want to hide about yourself on tonight’s date–you’re cheap, you’re a heavy drinker, you’re broke, you have a problem with anger” (S2E21).
.
Socialising: For the past month I’ve been being good on the weekend and staying in, trying to save money, and except for my trip to Cornwall for Lucy’s birthday, I’ve been achieving this. However with Lucy out over the weekend and John back in his hometown Oxford I thought I better get out and about and see some friends. Surprisingly I managed to have two really great budget nights! On Friday I went in to Leicester Square with my friend Charlie and we had a few (4 large each…) glasses of wine at Yates. It was one of those nights where it was just really fun to get drunk together and have a natter about whats been happening in our lives and it was only £6.30 a round (which Charlie mostly bought because she’s amazing like that.) I ended up falling asleep on the last train home though which is never fun! On Saturday I met up with my ex work colleagues (and beautiful friends) who worked with me in my last restaurant. It was a guy’s birthday which he had reserved an area for, there was wine, there was jugs of cocktails and there was prosecco… yum! Here’s some piccys from the night! I stopped myself getting a taxi back and went for the night bus home so all in all a pretty cheap night : ) 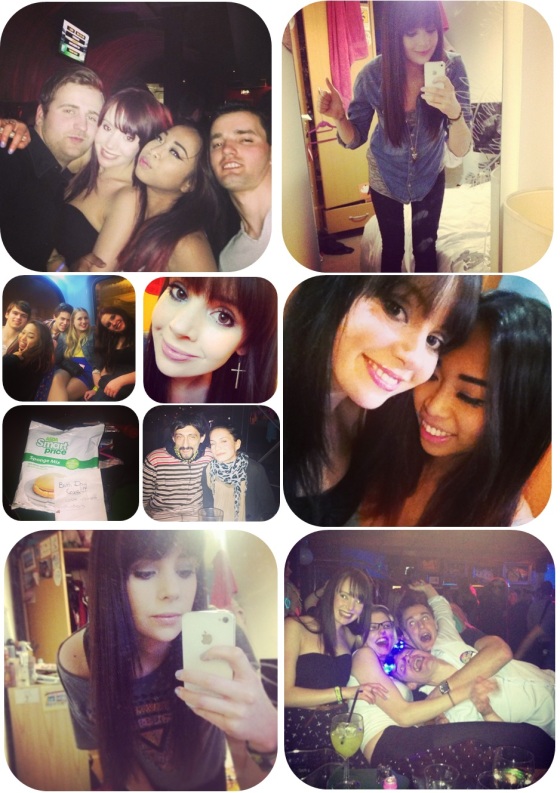 Hangover Hell: With the joy of going out and having a good time usually comes the dreaded HANGOVER day! Of course you can argue that days such as these would easily be avoided if you didn’t drink to excess the night before, but in all fairness I don’t think I do. Sometimes I can escape with a minor headache, or a general grotty feeling but both nights out this week left me feeling rotten the next day. The hangover miracle cure I swear by is drinking tonnes of water, (in fact I’m a bit of a water obsesso in general), but as always I don’t always follow my own advice. Instead I stupidly passed out in bed as soon as I got home, no water was drank, no make-up removed (ouch poor skin). This meant I missed out on a really nice day Saturday, I stayed in bed all day mewing and feeling sorry for myself watching too much YouTube and New Girl until I finally dragged myself to Tesco. After some Lucozade, Innocent raspberry and apple juice, tea, soup, bread, pringles and dip (I always have the weirdest cravings when I’m hungover) and a shower I felt marginally better and dragged myself in to town for round two. OH the things we do to our poor bodies! It’s safe to say I’m going to be taking it easy this week and making sure I’m being a bit more healthy.

Window Shopping: Is the only shopping I can do right now *cry* I had a browse around Urban Outfitters in Spitalfields the other day, so many cute things I want! Nice mugs (I love buying mugs) nail polishes, coasters, candles and quirky books (don’t even get me started on the clothes!) Oh well a girl can dream.

Buses: Neither good or bad but I found it quite amusing when I was walking down The Strand the other day and saw seven buses in a row… you know the saying >.<

Do you have any miracle hangover cures? Have you been watching any of the TV shows mentioned, thoughts please! : D